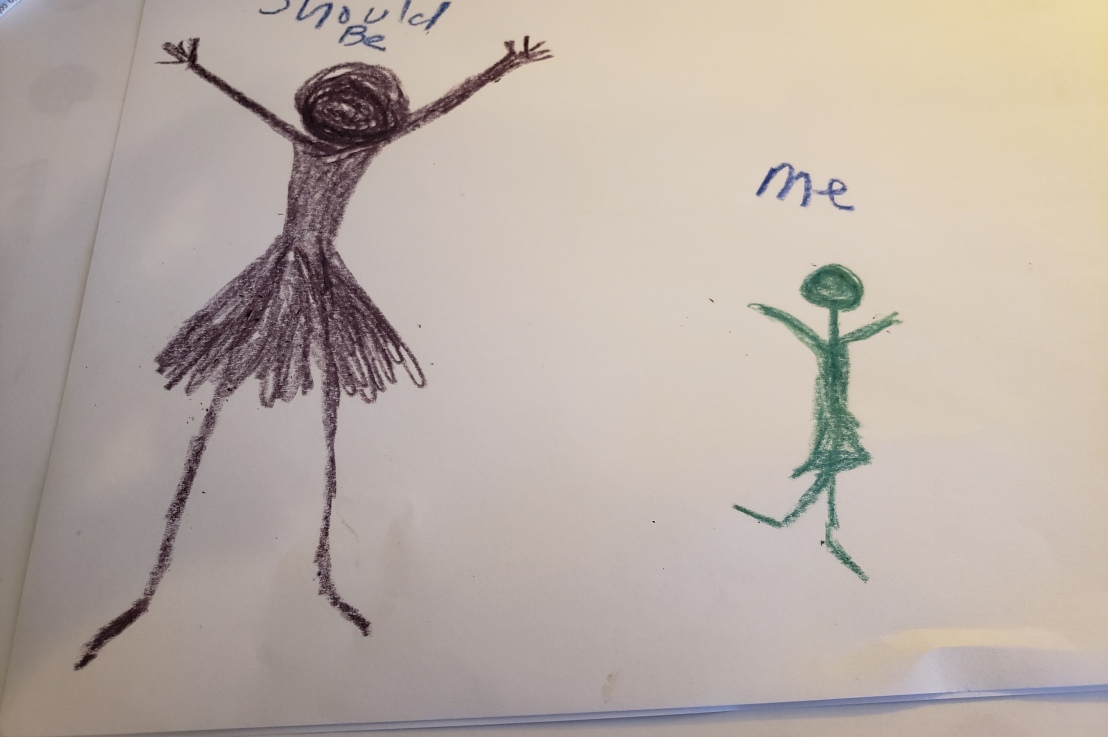 I want to share an insight that I’ve been struggling with for a bit. It’s true that I’ve touched on this to some extent in other blogs… But as they say, I want to go for a deep dive into this topic that starts with my picture above.

Yes. I drew those fancy women with my very own crayons. The big one is labeled “should be” while I called the little one “me.” I wrote that out in case you can’t read my sloppy writing. It’s not that I think that I should become a bazillion feet tall purple woman with a fancy skirt. The idea is how I think in terms of myself and my story. Don’t worry! I’m not going in a deep dive when it comes to my neuroses or how I view myself for I have other avenues for that.

It’s more to consider about “story.” My big thing is that I tend to approach story like a producer on an indie budget. It means that I think “small” in terms of locations as well as “set pieces” that tend to be emotional rather than physical. Plus, I also try to limit my number of characters. But what do all of these fancy things mean? Okay. They’re not super fancy. It’s more about defining things to let you know what I’m thinking when I write what I wrote.

Let’s first talk about locations. This is actually a huge deal for that they can be super expensive. An example is when we were in preproduction for the feature MY APOCALYPTIC THANKSGIVING that I’m producing. We approached a graveyard to shoot in it for less than half a day. Their fee was $4,000 for this. It was a beautiful location for sure. But $4,000!?! I can only imagine their cost now since that was a few years back. We lucked out because we found another cemetery in Altadena that was happy to work with us. They’re called Mountain View Mortuary & Cemetery.

My point is that many locations mean many costs. Another possible costly item is what is called a “set piece.” This phrase means something with a massive “wow factor” that costs a shit ton of money to execute. As for my set pieces, I write to not have a big budget to pull these off. My approach instead is to come up with an “emotional set piece” where I create fireworks on the page to get characters to explode/implode with their emotions. I do this because characters doing this can make for riveting drama.

And you’d probably be surprised that these kinds of set pieces are often missing from stories in that many writers don’t want to hurt their characters. It’s understandable in that you care about your characters since you breathed life into them. But it’s really okay to toss ‘em around. In fact, it makes for a more dynamic story if you do. Characters don’t need to be spared for they will never grow. They’re just like regular folks: we all tend to learn more from failures and hardships than from when everything is going along swimmingly well.

The last area that I tend to follow is to try to limit my number of characters since more actors mean additional workers comp, other insurance, and even more craft services. These can become more costly. The other important part to consider… More characters mean that they tend to be thinner or closer to being one dimensional since there isn’t time to develop them the more there are of them. A stronger choice “storywise” would be to give more layers to fewer characters. This can really give you the opportunity to write some really rich ones since you concentrate your efforts instead of overextending them.

See… All of this sounds practical and reasonable. You probably all agree with me too. It’s also the kinds of thoughts that are prudent when trying to be an indie producer…

Here’s the thing though… I’m not trying to write three of my current four scripts to be independently produced. My goal is to write things that can have real budgets. I’d like some of the “Studios” to take a crack at producing them. This isn’t to say that I’d write a TV pilot with an intense budget for its episodes needs to be financially sustainable. I’d rather instead come up with “money scenes” that push my story in compelling ways without emptying the piggy bank.

Again… This sounds good and all. Right? And now you know where I’m stuck. Yes. I admit that I’m stuck. That’s why I’m the silly little greenish/bluish person instead of the purple woman. I’ll also say that I didn’t consciously think that I should make my character with a green tinge because I’m jealous of the purple woman. (She also has her own shit.) It’s more that I like that color.

I also think that it comes down to the simple idea that I’m afraid to dream big when it comes to storytelling. My rationale is that I’m a newbie writer except that I’m not anymore. I have several bylines and IMDb credits for writing. In addition, I started placing in scriptwriting contests in 2018. What does this mean to me? I need to take off my “training wheels” mindset of only thinking small if I want to tackle the big. This also includes changing my thoughts of “micro-budget” indie producer to just “indie producer” since they also get shit made.

Does anyone else have this same struggle? You’re welcome to share your thoughts along with your solutions… My current idea is to just say “fuck it” and write what comes to mind. But are there any more graceful and methodical ways to approach this sticky wicket? You can comment here or email me at hollysorianoblog at gmail.com or post on the different social media websites where I share this column. I’ll expand on whatever ideas sound best in my next post.

Ha! My dad found this in his storage. I drew this when I was 13. It's cool that he kept it. And a surprise. But it wasn't a surprise that I drew this because I had stacks and stacks of drawings like this when I was around this age.
I know that the shadows are off but check out this drawing at Starbucks. It's supposed to represent strawberry sauce of some kind. But it just looks like a kid's drawing of blood. I realized that I should have added that I love how it flies in the face of "corporate standards."
This used to be how draw all of the time. But life stepped in too much. And I'm hoping to do a little bit more in the future to release shit. #drawing #sketch
Remember these?
Week 52 #processedsugarfree and week 42 #processedcarbsfree. Ah... But here's the scoop: Facebook notified me that it was a year in March for the processed sugar. So, this means it's also probably a year for the processed carbs. I have no clue how my count got so far off. But I want to thank all of you for your kind words of love and support! These flowers are my thank you to all. You all kept me going when it was tough. And it was plenty tough for sugar free things are far more addicting than actual sugar. And it fucked with my head in that I was sending a message to myself at every meal time: I don't trust myself. This was extremely hard on me. I also have to be honest that it didn't work as well as I wanted. Yes. There are a shit ton of factors involved. But I'm going to take time to regroup and come up with a solid plan. I'll post it when I'm ready rather than giving you all a knee jerk reaction for this is in part of how I got here. The good news is that I have more than a year. And stopping the sugar along with my breathwork had helped me to reach a much different place with my traumas and bipolar. So, I'm signing off for a bit... And may the force be with you for my Star Wars fans ... Let's also not forget: mischief managed from Harry Potter. 🤗🤗🤗🤗 Do you have any thoughts you want to share? Feel free to reach out. 😊😊😊
Today is 51 weeks #processedsugarfree and 41 weeks #processedcarbsfree. Yes. Next week marks a year. I'll have a big announcement and reflections to offer next week. I hope you're making progress slowly but surely on a goal or two.
%d bloggers like this: