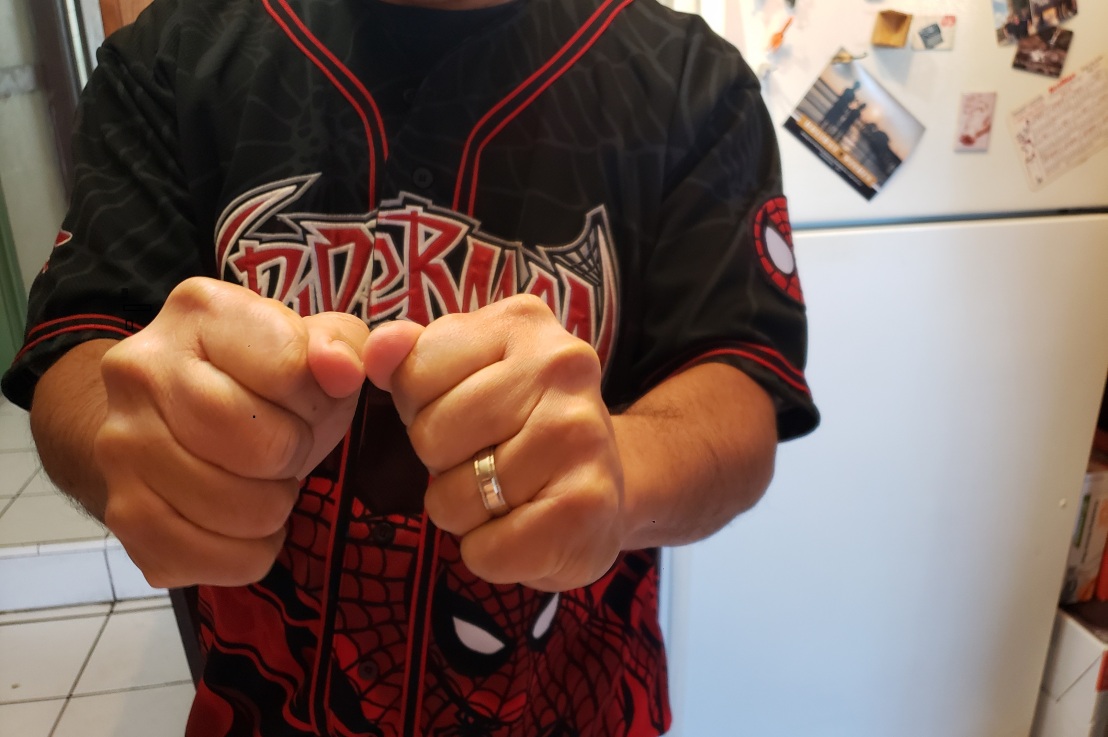 I have to thank Richard for being my model again. See… he’s showing off his “white knuckles.” It’s not that his knuckles are literally white for he’s Filipino. Nope. I’m talking more about the figure of speech suggesting your knuckles lose color from you gripping so tight…

But what does that have to do with story? I came up with the simplest of answers: Pushing Plot. Okay. I got it except what does that mean? It’s that there are many major components to stories. This happens to focus in on two parts. They are character and plot.

As for character, they are the “people” inhabiting the world of the story. And the plot is essentially the “plan’ of a story. I’m not going to digress into the definition of story for that could get distracting except check out Merriam Webster’s definition if you’d like to know more. So, let’s get back to those people (character) and those plans (plot.)

I now understand how come my characters flatten out when I come up with plot first. It’s because I’m contorting my characters to fit into the plot instead of letting the plot organically come from my characters. The idea that comes to mind is when you have all of these great dreams that you want to pursue but let’s say menial jobs unrelated to your dreams are the only jobs available in your town. I’m speaking from experience in this one when I say that you have to let go of those dreams to do the task at hand. It made me want to scream and leave Dodge. But I had to white knuckle it in those jobs until I had the resources to get the hell out.

And this is how it is for your characters when we push plot down his/her throat instead of taking her/him into consideration. This isn’t to say that some white knuckling isn’t good for the soul. It definitely did for me including lots of story fodder. Here’s the deal though… Do you have a good enough relationship with your character to know if his/her white knuckling is good or bad?

I don’t believe you need to have a bazillion page character biography. In fact, I went crazy writing all those endless documents in my MFA program. The reason is that those tend to focus on the “facts” of your character. But this won’t necessarily tell you how your character will react if someone pours a bottle of mustard on his/her favorite shirt of all time. You find this kind of stuff out after you spend time with your characters. This builds intimacy with our characters to know his/her good, bad and ugly. One of the biggest ways is to write pages that may or may not be related to your story.

A simple exercise that had us do during my MFA program was to stick characters in a broken elevator to see how s/he would react. I guess that this is also on the USC application for their MFA screenwriting program. Okay. My information may be dated. But this is still a good exercise that gives you answers quickly on your characters threshold for white knuckling.

Another idea is from Scott Frank (LOGAN). He said that he doesn’t know much about his characters except his/hers fears. And he makes sure that he puts them in that situation. You’d definitely learn a lot about your characters doing something like that including whether or not they fit with his/her plot.

The point is that your characters white knuckle his/her way through stories if you are more interested in pushing plot than character. This leads me to a very important question… Do people generally talk about the plot or characters when they describe narrative stories? My experience is generally the characters for audiences relate more to other people more so than his/her situation. Plots may be cool but characters are what compel us to want more unless s/he pushed plot so hard that it ran them over.

Have a great night!

One thought on ““White Knuckles – Storywise””

Cheers to week 47 #processedsugarfree and week 37 #processedcarbsfree. It's been a wonderful process for I feel so much more grounded from it. My ongoing breathwork has also compounded this in a wonderful way... And it's like all commitments where my word to myself is more important to me than my ever changing emotions. 🥰 How about you?
Ha! Today is week 46 #processedsugarfree and week 36 #processedcarbsfree. It's funny. I've been chewing on something that got my brain to spin like it did on sugar. And I have to say that I'm grateful this is no longer a regular thing like it was with the processed crap. I honestly didn't realize how destructive it was until after I got all that crap out of my system. What about you? Any small and steady thing that helps you? I'm always looking for ideas. 🥰🥰🥰
Today is week 45 #processedsugarfree and week 35 #processedcarbsfree. Yes. I'm rough around the edges... It's that I'm coming down from hanging with my sissies in Vegas. A fun time was had by all. And I stayed true to my commitment to myself. Yes. It's so easy to fall off the wagon on vacation except... You have to live with your decisions well past your vacation.
Ha! The quiet before the storm! I'm in Vegas to meet my sissies! And today is week 44 #processedsugarfree and week 34 #processedcarbsfree. I've also been processing some really big shit in my breathwork sessions. I'll write about them more next week. I want to decompress from work before my sisters get here in a few.
Yup. I'm a total nerd this week because I made it all the way to bed before I realized I almost missed reporting in... week 43 #processedsugarfree and week 33 #processedcarbsfree. But I also wanted to let you know that I've still been doing it one choice at a time... An interesting thing that happened is I've really started to enjoy more salt. Hmmm... I remember salt licks from when I was a kid when I lived on a farm. These are big blocks of salt for cows. I'm not craving those but it would make life easier. ;)
Week 42 if #processedsugarfree a day week 32 #processedcarbsfree. Okay... I've been working on #intermittenfasting for a while. And I feel pretty comfortable with it. This is where you eat in a shortened window. I'm also catching up with my paperwork for so many of my projects. This relieves a shit ton of stress as well as frees up my schedule to finally incorporate regular exercise. I'm excited because I should start to see real results pretty soon. It's time to have my outside reflect my inside because my #breathworkhealing has profoundly helped me find radical peace. 😊 And I believe that I have a much greater chance at success with my gradual steps instead of all that once. How about?
%d bloggers like this: