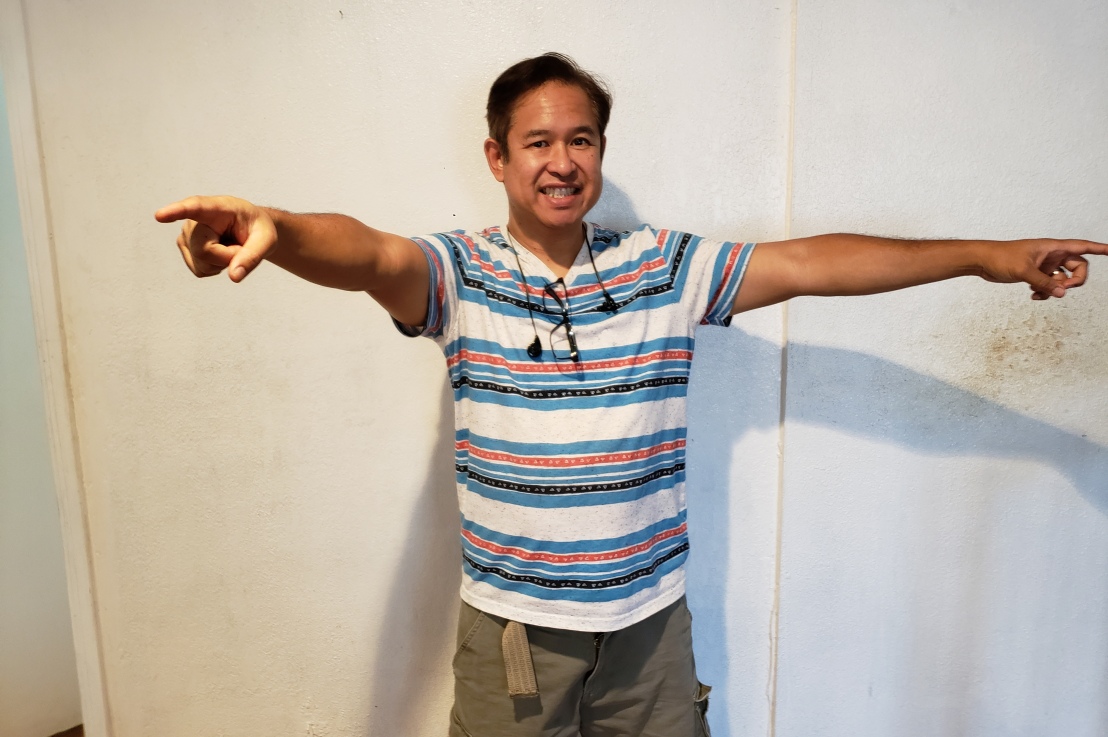 Long time no hear from me, right!?! Sorry about that. I didn’t actually fall off the face of the Earth or even drop dead. My life has been more like how my husband Richard models for you all: I’ve been pulled in bazillion directions. As a result, many things have fallen by the waste side. This was one of those things…

The good news is that I’ve also had some time to brainstorm many topics that I wish to cover in future blogs. I’ve also done a big push in terms of understanding writing more as well as how it relates to my life. Plus, I’m creating a list of topics that I plan to cover in a book that I will be publishing at some point in the future. I’ll keep you posted about the status of it.

But let’s get back to screenwriting for the time being… The topic that I want to cover is that of being pulled in multiple directions. A big thing that has made these possible is my idea of when I consider my scripts done. The simplest answer is “never.” What?   Right? I know that sounds crazy except hear me out:

One can always get new information in order to revise a script. This is why you’ve heard that some people have revised their scripts hundreds if not thousands of times. It’s easy to do for it can be as simple as “if I change _____________ it will make all the difference in the world.” Wait! Changing that thing means that I need to change this in order for it to be consistent, make sense, flow, (insert the answer), and changing that means that I need to change this other thing and that other thing, etc… You have yet another draft before you know it. But wait… I can change this one thing and boom! The process starts all over again. It’s that idea of death by 1,000 papercuts.

I know this quite well because I’ve been down this rabbit hole many times. In fact, I’m currently there for five different scripts. It just gets to the point where I stop. Some would say that this goes against the idea of “never” except me stopping on a script doesn’t mean that I’ve completely let it go. I offer up a script that I started at the beginning of my MFA program. It was pretty terrible when I started it, but I’ve gutted it many times. I’ve even chopped it in half for I finally realized the compelling part was its backstory rather than its initial execution.

And I’m finally getting somewhere with it in that feedback is no longer polite. People seem to genuinely like it or hate it now. C’mon. You know exactly what I’m talking about when it comes to feedback. It is always bad when people give circumspect notes rather than those that go for the jugular. This is whether they go for the jugular in a good way or a bad way. Either of these strong reactions suggests that the script impacted the reader much more than if the notes are polite. I know because I’ve been there. It’s that I’ve read a script only to realize that I don’t remember much of it for a whole host of reasons.

I throw out the disclaimer because it’s never just one reason why a script doesn’t work or stand out. But I want to be very clear in that I think that the Save the Cat’s idea of “Pope in a Pool” isn’t exactly the best advice. It’s the idea of pushing exposition while characters create shock value. It’s similar to serving sugar with medicine to help the medicine go down.

The reason is that there is nothing like really engaging writing to help the medicine go down far better than sugar. I feel like I’m getting closer to engaging writing for I’m starting to get genuine feedback on all of my stories. This is ultimately why I’m down the rabbit hole for my five stories. I’m not ready to just stop. This blog isn’t so much about stopping as it was about reaching out to others for I don’t believe I’m alone here for I ultimately know that it takes a lot of time to hang out with rabbits…

You’re welcome to throw out your thoughts about your own experiences in the rabbit hole(s).

Have a great day!

Cheers to week 47 #processedsugarfree and week 37 #processedcarbsfree. It's been a wonderful process for I feel so much more grounded from it. My ongoing breathwork has also compounded this in a wonderful way... And it's like all commitments where my word to myself is more important to me than my ever changing emotions. 🥰 How about you?
Ha! Today is week 46 #processedsugarfree and week 36 #processedcarbsfree. It's funny. I've been chewing on something that got my brain to spin like it did on sugar. And I have to say that I'm grateful this is no longer a regular thing like it was with the processed crap. I honestly didn't realize how destructive it was until after I got all that crap out of my system. What about you? Any small and steady thing that helps you? I'm always looking for ideas. 🥰🥰🥰
Today is week 45 #processedsugarfree and week 35 #processedcarbsfree. Yes. I'm rough around the edges... It's that I'm coming down from hanging with my sissies in Vegas. A fun time was had by all. And I stayed true to my commitment to myself. Yes. It's so easy to fall off the wagon on vacation except... You have to live with your decisions well past your vacation.
Ha! The quiet before the storm! I'm in Vegas to meet my sissies! And today is week 44 #processedsugarfree and week 34 #processedcarbsfree. I've also been processing some really big shit in my breathwork sessions. I'll write about them more next week. I want to decompress from work before my sisters get here in a few.
Yup. I'm a total nerd this week because I made it all the way to bed before I realized I almost missed reporting in... week 43 #processedsugarfree and week 33 #processedcarbsfree. But I also wanted to let you know that I've still been doing it one choice at a time... An interesting thing that happened is I've really started to enjoy more salt. Hmmm... I remember salt licks from when I was a kid when I lived on a farm. These are big blocks of salt for cows. I'm not craving those but it would make life easier. ;)
Week 42 if #processedsugarfree a day week 32 #processedcarbsfree. Okay... I've been working on #intermittenfasting for a while. And I feel pretty comfortable with it. This is where you eat in a shortened window. I'm also catching up with my paperwork for so many of my projects. This relieves a shit ton of stress as well as frees up my schedule to finally incorporate regular exercise. I'm excited because I should start to see real results pretty soon. It's time to have my outside reflect my inside because my #breathworkhealing has profoundly helped me find radical peace. 😊 And I believe that I have a much greater chance at success with my gradual steps instead of all that once. How about?
%d bloggers like this: